Technically, the irrigation strategy for maize relies on a few simple principles: knowing the needs of the plant and at which stage they need to be met; knowing the climate conditions – which influence the plants’ evapotranspiration, and knowing the soil depth – which is the buffer reservoir that allows one to space out the irrigation intervals. The other technical parameters to consider are the available water source, the energy cost, and the permitted water pressure, which dictate the water flow and therefore the aspersion equipment that is best adapted to the needs at hand.

Water needs are driven by climate and crop stage 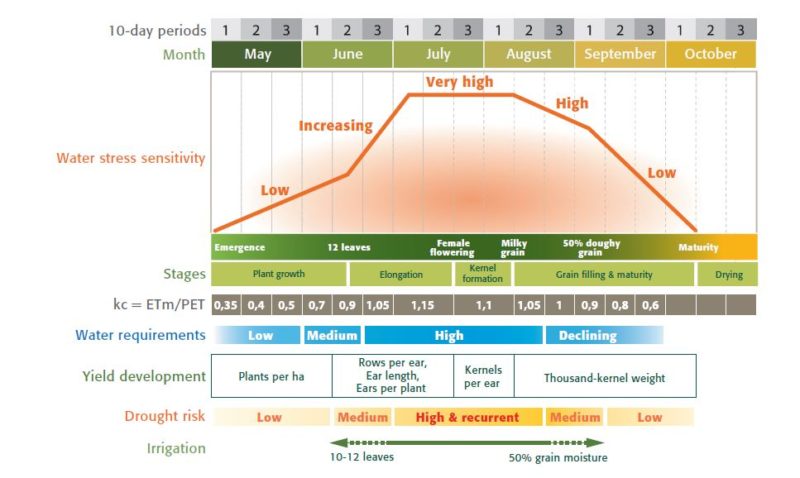 Except for the special cases that require irrigation to enable emergence, maize irrigation is not useful before 10 leaves. Before that stage, the crop’s water use is low. The soil moisture reserves are therefore enough – provided that tillage has been carried out correctly.

Checking moisture levels through soil probing or with the help of a graph of readings allow one to know when to initiate the irrigation. The equipment used and particularly the length of the irrigation should also be considered, as with lengthy passes, one should be able to estimate start-off even more accurately, so that the last field portions are not irrigated too late. Starting with 12 leaves, the plant’s needs become more stringent, as it must simultaneously ensure a rapid growth of its vegetative body and form its reproductive organs.

The amount of water should be adapted to the plant’s needs, which vary from one stage to another. The applied rate depends first of all on the soil’s ability to store water (and thus form the so-called soil reserves). With maize, irrigation frequency is closely linked to the flow rate of the equipment. Farmers should refer to assessment elements provided by soil water graphs and tensiometer checks.

Under typical European climate conditions, an average 5 mm of water a day – applied from three weeks before flowering to three weeks post-flowering – is usually seen as enough to allow the hybrid to express its full genetic potential.

In case of water supply restrictions, the user should first increase the irrigation frequency. If conditions grow severe, irrigation should focus around the maize flowering period. To resume irrigation after a rainfall: the basic rule is to wait one day for every 5 mm of rainfall (to be adjusted according to soil moisture measurements).

Globally speaking, one should seek to harness the “deep” water sources, in order to avoid useless irrigation at the end of the crop cycle. The main issue at this stage is making sure that all kernels present will be well-filled, as a premature halt of that process may “cost” the producer 1 ton worth of yield. Therefore, deciding when to irrigate one last time depends on the kernel stage (50 percent moisture) and the soil moisture condition. A very handy way of assessing is by simply “reading” the vitreous starch progress inside the kernel.

In addition to the irrigation management per se, one can significantly improve the performance of irrigated maize by choosing the right hybrid. The latest hybrids on the market are able to tolerate longer stress periods and resume their development more easily after a long-lasting stress (they display the so-called “resilience”).

Field trials organised to control various stressors reveal yield differences among hybrids, which can reach as much as 15 quintals. It is worth noting that changing the earliness class does change water needs significantly; thus, choosing to plant a later hybrid group can save up 10 mm (100 m3) at best over the entire production cycle. Equally, early planting does not diminish the plant’s overall water needs throughout the cycle, but it rather helps to avoid the high-risk periods due to the early flowering and the hybrid’s ability to preserve the potential number of kernels per square metre.