Maize is generally little affected by cryptogamic diseases. This “ecological advantage” is due to the plant’s origins and the fact that maize was historically bred without resort to phytosanitary protection.

Disease risks are therefore to be limited through various preventive measures:

In dry, continental summers and with rotated maize, the risk of certain diseases is lower. However, depending on the year and region, maize may be exposed to local damage. Good hybrid selection and an efficient integrated management help control helminthosporiosis and Fusarium, which present the highest risks. Foliar diseases may trigger significant yield losses when they are highly necrotic, when they settle in early, and when crops are harvested late.

Triggered by the development of several types of fungi (Pythium spp., Fusarium spp., Rhizoctonia spp. – often occurring simultaneously), root necroses result in significant plant lodging in specific locations, which become visible at harvest time. To limit any further development after having spotted the areas or the hybrids at risk, one should apply proper agronomic management practices: preparing the soil and ploughing in good conditions – including a second pass on sufficiently dried-out soil.

In addition, a good precaution – especially with Rhizoctonia – consists of localised, seed-row treatments with products such as azoxystrobin, of the chemical family of strobilurins. 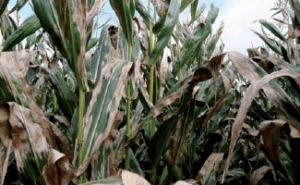 Several variants of helminthosporiosis exist, with variable damage potential. Usually occurring after flowering, the attacks can be violent and can cause the photosynthetic capacity of maize to collapse. In the most challenging situations, with crops that develop early and fast, grain yield losses may reach 20 to 50 percent.
The producer must be aware of the hazardous situations in order to be able to take the necessary prevention measures.

Plot-related risks are higher in the following situations:

To control helminthosporiosis, one must take a few simple precautions, such as: 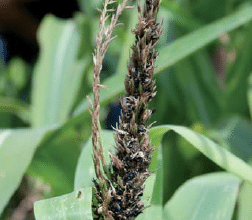 Common smut is the most frequent corn disease. The Ustilago maydis spores are naturally present in the crop’s environment and are highly volatile. Contamination often takes place through “natural” entryways (the silks) or otherwise tissue injuries caused by parasites (Oscinia spp) or by herbicide phytotoxicity, as well as kernel or ear abortion, or water deficit. The fungus grows on young or developing plant organs (apex, axillary buds, inflorescences, etc). The disease rarely causes damages. There are no treatments for it. Controlling the risk factors mentioned above remains the most efficient method – however, with no guarantees. A certain amount of sensitivity to it exists in specific hybrids, whether directly or indirectly (to insect pests and parasites, accidents etc).

Heat smut is a disease that occurs less frequently, but can cause significant yield losses. Typical head smut symptoms – due to Sphacelotheca reiliana – only become visible after flowering and are found on the plant’s reproductive organs, tassels, and ears. The soil is the main source of inoculum. The same factors that weaken and slow down the growth of young plants – such as early drought and soil compaction – also favour the development of the disease inside the plant. This is one of the reasons why symptoms are often noticeable along field edges. Certain hybrids are more susceptible to head smut than others.

These diseases rarely cause serious damage and their economic impact is limited. Crop residue burial, tillage, and crop rotation limit the infection potential. Monoculture and direct drilling increase risks. Rust and eyespot occur mostly in regions with a cool oceanic climate and after flowering.

Anthracnose occurs earlier (before flowering) and in hot, stormy climates characterised by frequent rainfalls. Symptoms differ from one hybrid to another, but the low incidence of the disease and the moderate damage it causes to hybrids have not justified any specific breeding work so far.

The complex interaction among climate, technical itinerary and hybrid sensitivity calls for several ways of action, in order to prevent potential cumulative effects:

Commission Regulation (EC) N° 1887/2006 regarding cereals and the risk of mycotoxins calls for increased vigilance regarding the causes that trigger the latter. It is crucial for both grain and livestock growers to detect and limit kernel molds, in order to secure a crop that meets sanitary standards.

Toxins require pathogenic fungi that can produce them. This is necessary, but not sufficient. The presence of Fusarium rots on maize ears does not necessarily trigger toxin production. Extensive surveys have been conducted in the EU in order to classify and rank risk causes. It has quickly become evident that climate plays a major role in the infection with, and development of, Fusarium ear rot, as well as in the related toxin production (rainy weather at the time of silking and during the following days; post-flowering hygrometry and temperature – particularly in early autumn). Water deficit, heat stress, and borers increase vulnerability to pathogens.

As to DON and zearalenone – secreted by Fusarium graminearum –, risk factors include above all harvest date, crop maturity, hybrid sensitivity, and crop residue management.

Fumonisines are secreted by Fusarium spp. (mostly F. verticillioides and F. proliferatum), which tend to be saprophytic fungi. Fumonisines are favoured by injuries made by ear and stalk borers (Ostrinia, Sesamia, Heliothis) or kernel cracks caused by water deficit stress, or yet again by over-contamination on pathogens already present on ears (of which F. graminearum). Just as for F. graminearum, specific hybrids present certain sensitivities to these fungi.

The risk of aflatoxins B1 or B2 (which feed processors fear) is caused by certain fungi (such as Aspergillus flavus), which thrive especially on kernels stored in a hot and humid environment. The risk is lower in temperate latitudes and higher with maizes grown in the south and east of Europe.