Feed maize is by definition the stored feed for cattle during the cold season. Its palatability and energy content make it a must in livestock rations, especially on dairy farms or in cattle feedlots.

Just as with grain maize, one must pay particular attention to the crop’s technical itinerary and harvesting method, lest one should damage its feed qualities. A good balance between the grain part and the stalk-and-leaf part of the plant is what makes maize a good feed crop. This balance depends both on the growing conditions and on the crop’s stage at harvest. Also, knowing your feed value well and being able to estimate your harvested yield are key to putting together a ration that best meets the needs of the herd.

In feed production, the whole of the above-ground part of the plant contributes to the yield and quality of the harvested product (DM content, feed value), as well as its storability. Yield is therefore not the only criterion, as the DM content at harvest is equally important for the crop’s storability, along with its chemical composition, which plays a part in the feed value.

The stage of the crop and the timing of the harvest – which influence the two criteria – are therefore decisive and they pertain to the grower.

Silage-making is a natural way of preserving feeds on the farm, thanks to the action of lactic bacteria, which in a humid, anaerobic (no-oxygen) environment turn soluble sugars into lactic acid. Silage thus stabilized can be stored for over a year. Two parameters are therefore important: the sugar content of the feed (which is naturally rich in such elements – hence its success) and the absence of air inside the silo (upon which the silage-making depends).

1. Timing the Harvest Based on the Grain Filling Stage

Under “normal” growing conditions, the right harvest time is at 32-33 percent of DM (dry matter) of the whole plant. By directly observing the grain-filling process and the clearly visible progression of the vitreous starch, the livestock farmer is able to spot the right stage of the crop and set the harvest date.

The harvest date has a strong impact upon the quality of the silage:
• Harvesting too early means getting a lower yield (as a result of fewer kernels per entire plant), obtaining a maize crop will lower starch content (hence less energy), and facing the risk of runoff (juice losses by seepage).
• Harvesting too late risks affecting the quality of the conservation (the silage becomes difficult to compact; the fermentation process is slowed down as there is no more air inside the silage mass and there are fewer soluble sugars). Moreover, the animal’s intake depends on the energy content of the feed as well as its conservation quality.

2. How to Master Fine Chopping for Conservation and Feeding Purposes

Chopping has two apparently conflicting objectives: chopping the plants finely to facilitate silage compaction, and leaving feed particles long enough for the cows’ chewing. Big particles (longer than 20 mm) are not recommended, as they hinder silage compaction and lead to the animals rejecting feed at the trough. Therefore:
• Longer feed particles should not exceed 1 percent of the total silage mass (or the equivalent of a mugful for a 10-litre bucket).
• Medium-length particles (10-20 mm) should be at 10 percent upon administration at the trough. The fewer they are, the better the compaction and conservation of the silage, especially if the maize DM is above 35 percent. However, it is the medium-sized particles that stimulate rumination.
• Kernel break-up size should be adapted to the crop’s maturity. The vitreous starch of maize with more than 32 percent DM/whole plant needs to be broken for optimum digestibility – and that is done with the aid of the kernel breaking equipment that most ensiling machines are equipped with. 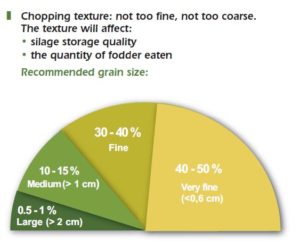 3.Ensure a Feed-out that Is Fast Enough

In a feed maize silo, losses occur mainly at the feed-out face, as the silage is being taken out for feeding. One of the rules one must observe in order to avoid heating is to move in the feed-out face before the fermentation process can resume. Generally speaking, one must keep in mind the following minimal rates of advancement when feeding out silage at the silo: an average 10 cm a day in winter, and an average 20 cm a day in summer.

4.Avoid the Presence of Soil in the Silo

Soil brought in by tractor and trailer wheels is a source of butyric spores which jeopardizes the good conservation of the silage. To avoid that risk, it is recommended that silos be built on concrete floors and that walking areas around them be on stabilised ground.

5.Compact to Close in as Little Air as Possible Inside Silo

The fermentation process – which leads to the stabilisation of the forage – takes place in an anaerobic environment. Absence of oxygen is a precondition of good fermentation. At harvest, about one litre of air is packed inside the silo for every kilogramme of dry matter. If everything goes well, all the air inside the silo is gone within a matter of hours. That is why it is important to eliminate as much air as possible from the silo through efficient compacting. Given the high-throughput ensiling machines current nowadays, compacting tractors have less and less time to do a proper job, especially when DM contents are high. In such cases, one must review the efficiency of the silo operations either by going back to lower-performance machines or by simultaneously building two silos using two compacting tractors.

On the harvest day, the silo must therefore be closed as tightly as possible, using a plastic tarpaulin, carefully laid and protected.

Upon opening the silo, the heating resumes as oxygen is re-allowed in. The mass of the silage should not be stirred during feed-out, as incoming air would re-launch fermentation. 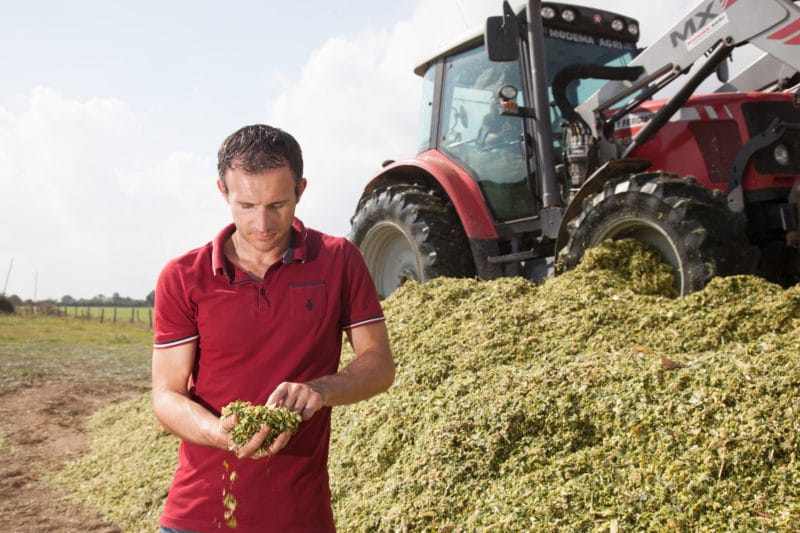 Knowing the nutritional value of each ration component is key to milk performance. With its high energy value, feed maize is rightfully seen as a staple element in all rations. However, its lower protein, vitamin, and mineral content compared to other feeds means that it needs complementing.

The factors that play into a good feed ration are clear. The objective is to cover the animal’s overall needs of energy, proteins, mineral nutrients, and vitamins. By nutritional value we understand the content of energy, proteins, mineral nutrients and vitamins. The livestock farmer must succeed in putting together a balanced ration, based on the feed resources they have on their farm – and if needed, buy the elements needed to complement it.

Below are a few elements that one should keep in mind in order to properly assess the feed value of maize silage and build a good ration – after analysing the samples taken from the silo:

• Optimum Dry Matter Content
If DM is anywhere above the recommended harvest level (30-35 percent), the nutritional value of feed maize risks being exposed to conservation problems, especially upon opening the silo.

• Measuring Mineral Components
Minerals represent an average 4 percent of feed maize DM. A result of more than 6 percent indicates the possible presence of soil and therefore a risk of proliferation of butyric bacteria.

• Monitor Total Nitrogen
Maize has a relatively low content of total nitrogen (6-8 percent of DM) in terms of animal needs, and requires complementing. It is therefore vital to know the total nitrogen content, in order to estimate the amount of nitrogen that needs to be administered through complementary feeds (grass and/or meals).

• Soluble Sugars: a Must for a Good Silage Conservation
Soluble sugars are inversely proportional to the plant’s starch content as it matures: thus, they go from 10 percent of the DM in a feed harvested at 30 percent DM, to less than 6 percent in a crop harvested at more than 35 percent DM. Soluble sugars are vital for the “feeding” of lactic bacteria needed in the chemical stabilisation of the silage. Harvesting at the right stage allows one to reach a good balance between sugars and starch.

• Starch: Indispensable, but without Excess
Starch is the essential component of the energy contribution of maize. At the recommended harvest stage, it represents 32-33 percent of the DM. This level can go as high as 40 percent in the case of high kernel number maizes that are harvested beyond maturity. An excessive starch content will hinder the proper assimilation of feed (which is “digested” too fast) and risk triggering acidosis. To limit that risk, it is recommended that the starch content stand at 22-25 percent of the overall ration.

The Golden Rule: Choose Your Feed Complements Well, Based on the Harvested Maize

> With maizes that are very rich in starch, one should add one part of grass feeds anywhere above 32-33 percent starch, in order to dilute the starch in the rations.
> By contrast, with maizes where energy comes mostly from the stalk-leaf part, the ration should be complemented with grains grown on the farm, such as high-moisture maize, barley, and wheat, in order to ensure the energy concentration of the ration.
> At all events, one should pay particular attention to providing the nitrogen-based complements, whether in concentrated forms (from protein crops such as peas or lupine, soybean or rapeseed meal), or as forage – especially alfalfa, whose fibrous make-up favours rumination.