The French National Federation of Maize and Sorghum Seed Production (the F.N.P.S.M.S.) has recently updated its Price Watch data regarding maize seed uses and resources on the European market, thus integrating the aggregated results of the 2019/20 marketing year and the first production trends for 2020 :

Despite a 16-percent increase in the European seed maize areas in 2020, the crops have been affected by difficult weather this summer: unfavourable conditions at the time of emergence, strong heat waves with historic record highs, and drought – all of which have prevented producers from attaining their targets for this season.

France – the first European maize seed producer – should attain nearly 90 percent of its production targets, off an area of 80 000 hectares.

Weather conditions have been difficult in other European maize production countries, too, in 2020, which will lead to below-target production levels.

Maize demand was strong during the 2020 grain and feed maize plantings and impacted the carry-over stocks. Likely production deficits in 2020 should prevent stock rebuilding, which had been envisaged on account of a 16-percent increase in the European production programme. As to the use of maize seed from the next season, several developments point to a higher demand in 2021: difficult rapeseed plantings in some of the major European producing countries; the need to rebuild feed stocks against the backdrop of drought, and the ongoing genetic progress made in the field of maize, with new hybrids included in the French catalogue in 2020.

Despite the strong demand, maize seed production has been affected by unfavourable weather. As a result, the market supply may be under significant tension for some maize hybrids.

Grain and Feed Maize Production in Europe: Areas up, yet Uneven Yields 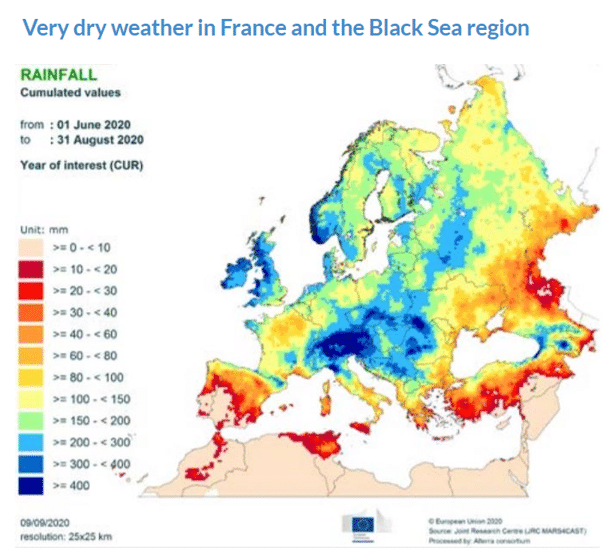 Although harvests are still ongoing, the first estimates by the European Commission indicate rather uneven yields from one country to another. Very dry weather in central-eastern France, north-western Germany, and southern Romania and Bulgaria hit yields in the non-irrigated areas in these countries. By contrast, summer rainfalls were satisfactory in Central Europe, allowing for good yield prospects all the way from northern Italy to eastern Poland. 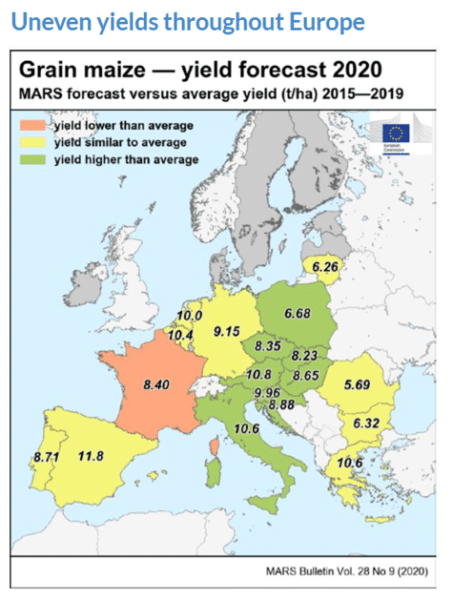 Further to the east, areas planted to grain maize increased strongly in Russia (up 9 percent to 2,8 million hectares) and Ukraine (up 8 percent to 5,4 million hectares). Here, too, results prove to be uneven, because of very dry weather all around the Black Sea region.

Overall, despite a summer marked by drought everywhere in Europe, maize should come out strong, with yields falling within the multiannual average limits.